The type species is a common tree in the eastern Mediterranean (its botanically named varieties are more like outlying small populations to the northeast). The common name comes after ancient Brutium (now Calabria in the southern Apennine Peninsula), where its stands are generally considered to be naturalized from ancient cultivation – these are the westernmost occurrences. When traveling in Turkey this pine is frequently found in areas roughly within a 100-km range of the western, southern and northern coasts. 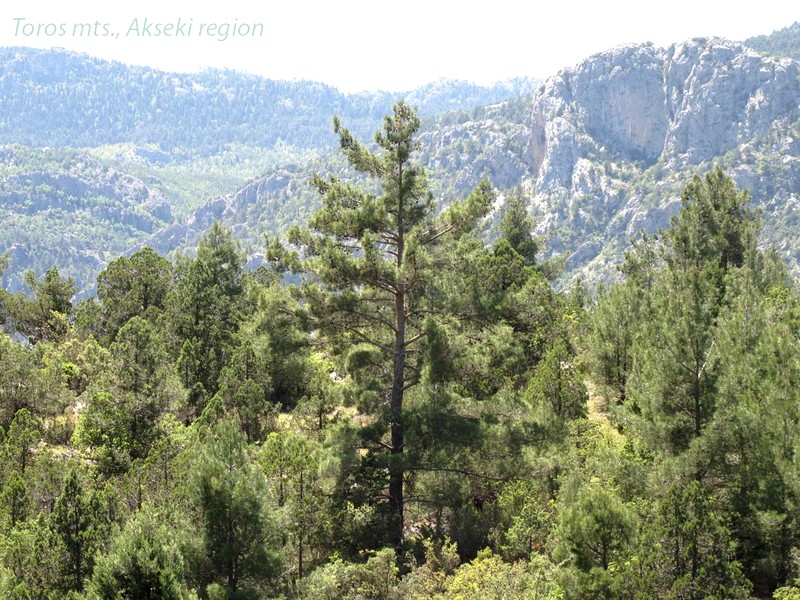 The photos below are from our recent trip to Turkey, in part from the lower ranges of the Toros mountains (at around 500 m in the Akseki region) and the Spil Mt. Milli Parki (national park) near the city of Manisa. Additional pictures were taken in the Dilek Peninsula, at the western coastline of Turkey (Aydın Province).

Here, in the Dilek national park – with full name the Dilek Yarimadasi Büyük Menderes Deltasi Milli Parki (1966) – there is a beautiful canyon running southward from near the north shore of the peninsula. The canyon entrance is guarded by a few old trees of Pinus brutia, their trunks around 1 m in diameter and heights approaching 25 m.

Old pine trees are also numerous in the canyon, scattered in or near the bottom, mingled with Ceratonia siliqua and Platanus orientalis and even with Cupressus sempervirens. However, the cypress likes to hike – more commonly seen high on the steep slopes rather than near the canyon floor (see another blog later).

Our visit took place on April 30 (2010) – as we observed the ovuliferous and pollen cones of the Pinus brutia trees we concluded that pollen shedding occurred about 2 weeks before. At least 3 weeks earlier than for example in Hungary, where we have a 10-m coning tree of this species grown from seed collected during our 1980 trip to western Turkey.