About Conifers Around the World

(excerpts from the Preface of Conifers Around the World) 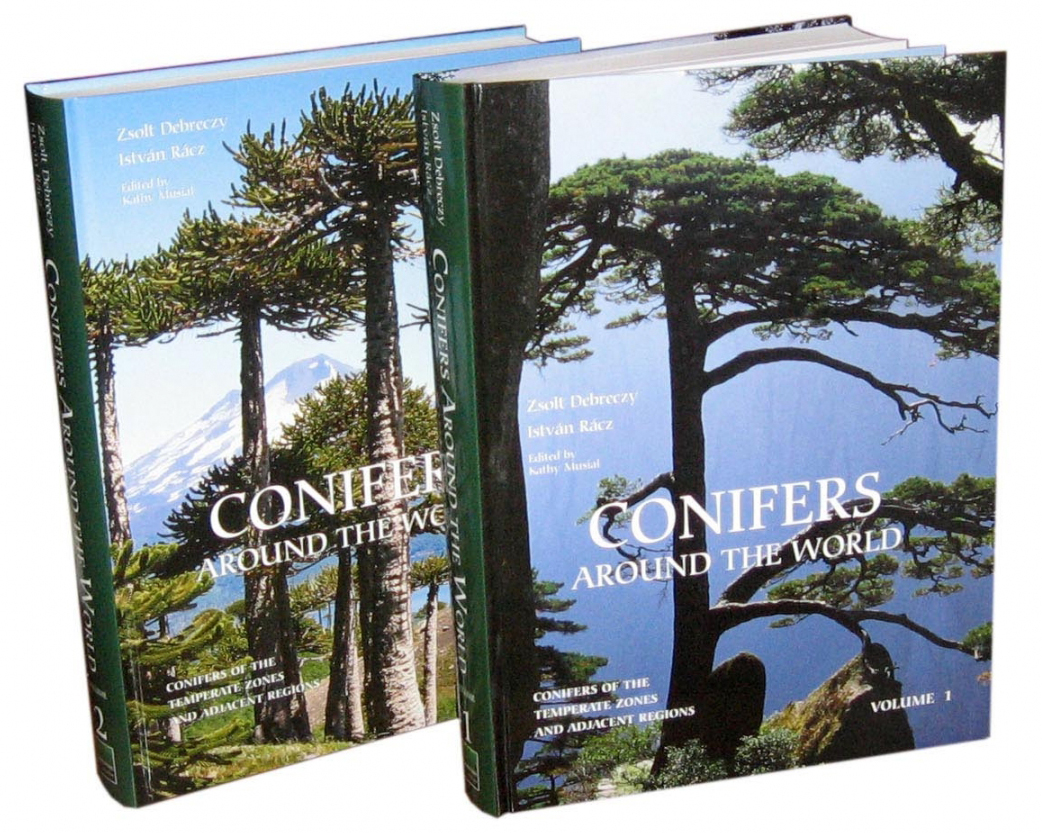 Bringing this book project to fruition has been part of a decades-long labor of love exploring and documenting woody plants and their habitats across the temperate zones. We have spent over 2000 days in the field over a period of 16 years (1990–2006), visiting many regions and countries on every continent except Antarctica. We have been supported by colleagues, scholars, local guides and enthusiasts, and over 160 fieldwork volunteers and many others who believed in and made valuable contributions to this project, and now we wish to share our efforts with you. This new publication, begun in 2003, is a much-expanded English-language version of Fenyők a Föld Körül (Conifers Around the Earth), which we published in 2000 in Hungarian, and it covers most of the conifers native to the temperate and adjacent regions of the world (over 500 taxa) presented in more than 3700 color photographs. Distribution maps of all discussed taxa, habitat photographs, a Bark Gallery, and nearly 1300 morphological drawings are also included.

Fieldwork is the foundation upon which this book is built. It was important to us to document these conifers primarily in their natural habitats, which provides the broadest context for their study. Finding, photographing, and collecting hundreds of taxa required extensive travel. For example, just in order to find some missing links in the documentation since the publication of Fenyők a Föld Körül, our itinerary (which completed most of the fieldwork for this edition) included travel to China and Mexico three times and Vietnam twice, as well as single trips to the southwestern United States, Canada, the West Indies, Nepal, Himachal Pradesh and Sikkim in India, Central Asia, and North Africa.
Publication of this book represents an important milestone on the road to a long-envisioned but not-yet-realized goal: a comprehensive and richly illustrated “dendrological atlas”. We began our scientific documentation of woody flora (dendroflora) in the 1970s at the Botanical Department of the Museum of Natural History in Budapest, Hungary. As part of a small team working in the field and in arboreta to document as much of the temperate-world dendroflora as possible, we envisioned incorporating our artist team’s detailed drawings and photographs into this atlas. Our extensive research travel had already revealed how rapidly our natural world is shrinking, and photographing undisturbed habitats became a major task with the goal that the best sites would be recorded and presented to the public as an educational tool. We also needed detailed photographs of the forest’s woody components, which (along with the herbarium specimens) helped the artist team to complete 3-dimensional compositions. Toward this end, we launched the ongoing Dendrological Documentation Project (DDP).
In 1988, our team received a Mercer Fellowship to the Arnold Arboretum of Harvard University, and in 1991 we were involved in the formation of the International Dendrological Research Institute (IDRI), which has allowed us to continue our DDP work. A Massachusetts-based nonprofit organization dedicated to research and education, IDRI’s primary focus has been on completing the documentation of the temperate gymnosperms and their habitats. Gymnosperms, a comparatively smaller group numbering nearly 1200 taxa worldwide, are distinct from flowering plants (angiosperms, est. >400,000 species) in that their seeds (or at least their ovules) are not enclosed in a carpellary structure (gymno=naked, sperma=seed). In the systematic ordering of temperate dendroflora, gymnosperms come first, and conifers, with about 800 taxa, are the largest group of gymnosperms (others are cycads, Ephedra, Gnetum, Welwitschia, and Ginkgo). Traditional ordering aside, however, we had many other compelling reasons to focus on conifers.
Conifers’ light, soft, durable, finely grained wood has inspired generations of builders and artists, but demand which is supplied by increasingly destructive mechanized harvesting worldwide has grown to the point of alarm, both for individual species and for their ecosystems. Fortunately, and despite industry efforts to convince the public that a monoculture tree farm is “just like” a forest, increasing numbers of governments, organizations, groups, and individuals are taking responsibility for protecting trees and their habitats. The number of reserves, both large and small, is growing, as are efforts to influence forestry-related public policy decisions.
We remain optimistic and hold high hope for the preservation of forest diversity, including conifers and their habitats. Our hopes are that conifer preservation will extend beyond a species-by-species perspective to embrace entire habitats, that the profession of forestry will turn away from faceless extractive industry and embrace stewardship, and that the economic value of timber will be balanced by the intrinsic value of natural forests whether they are in large parks, reserves, or tiny sanctuaries.