Documenting such a unique species is a lifetime experience. This could happen for us in April 2003, organized with the kind help of the Embassy of Algeria in Budapest, and with the professional assistance of the Institut National De La Recherche Forestiere (INRF) in Cheraga, Alger. There, Dr. Nedjahi Abdellah, Director General of the institute arranged that his colleague Mr. Gadiri Nassim of INRF was to accompany István to Djanet, foot of the Tassili Plateau. 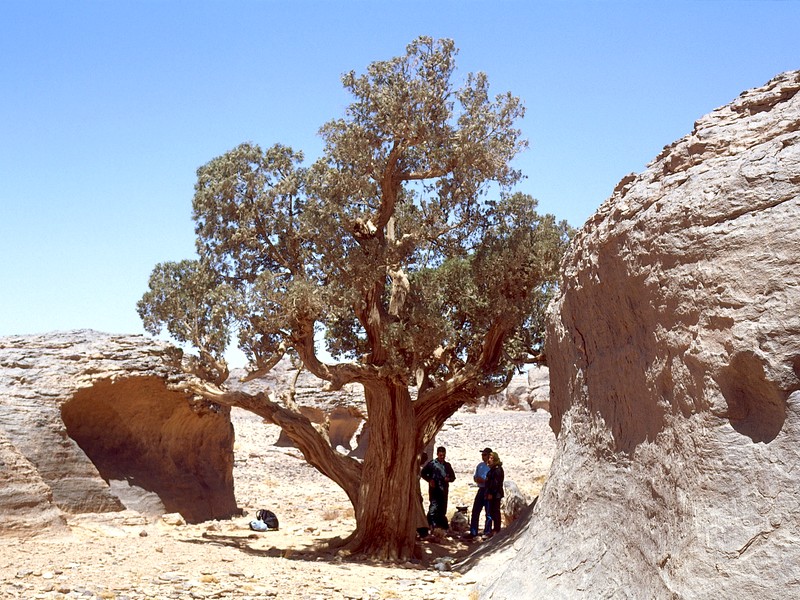 The flight from Algiers to Djanet, the "capital of Tassili", located in southeastern Algeria, Illizi Province, at around 1000 m elevation, was taking us over long stretches of the Sahara. The ocean of sand, often with intricate waves, and in many places spotted by protruding boulders, was an amazing sight by itself. Landing was kind of exciting because it seemed the plane will end up in the sea of sand – but all was well done. Getting out and traveling from the airport to Djanet when the temperature was about 43°C … 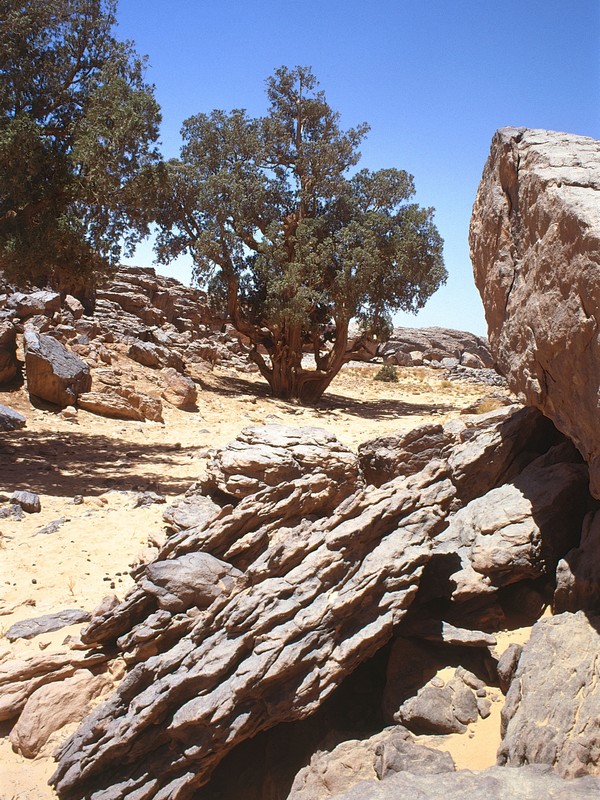 A few words on Djanet, and its people. Djanet, in the Tamashek language, a Tuareg dialect, means "a resting place" (for caravans). The nearby Tassili Plateau (home of the Tarout, that is, Cupressus dupreziana), means "rocky upland". The local Tuareg insist that they are not a nation, but they are members of the "Tuareg Civilisation" – several tribes of the Tuareg live in Algeria, Lybia, Burkina Faso, Mali, and Niger. Djanet was founded about 900 years ago next to a large oasis, famous for the large population of the date palm. Today about 10 thousand people live in the city and its surroundings.

The same day, in the afternoon, we met the Tassili National Park officials and made arrangements for the hike to the cypress habitat on the plateau. The national park was established in 1972 with the main goal to preserve the remaining trees of Cupressus dupreziana. In 1982 the area was declared a UNESCO World Heritage Site.

Next day a small team of 5 people led by a Tuareg guide started very early in the morning to visit the 'Djabbaren' location of the cypress. Participants: Mr. Gadiri Nassim (INRF); Mr. Agaahmed Mohamed, a mountain guide from the Office du Parc National du Tassili (OPNT) in Djanet; Ms. Dekkal Ferroudja and Mr. Sebti Denar from the local Conservation des Forets (office of forest administration); and myself. We start early morning in the dark and after a 10-km drive reach the foot of the plateau by jeep. From about 1010 m we climb to the plateau and reach the rim at around 11 AM (elev. about 1750 m).
Within the range of the species, the Djabbaren location has 5 old trees of the cypress. We notice the first trees in about 30 minutes. Three cypress specimens (with trunk diameters from 40 to 90 cm) and their associated plants were documented in about 2 hours. Another site of the same general location, about 1 km from the previous site, had 2 perfect specimens (trunk diameters near base are 80 and 140 cm, respectively) and a dead trunk of Cupressus dupreziana. After documenting of these trees, we start to descend and reach the foot of the plateau around sunset.
The very few woody plants associated with the cypress include Lavandula pubescens, Myrtus nivellei, Olea laperrini, and Ziziphus lotus.
The pictures taken on site were greatly needed for the photo plate now in Conifers Around the World, page 176, here also reproduced. We thank all the guides and helpers (see images below) who kindly assisted this visit.