One of the most important native trees of Japan, Sugi occurs almost everywhere – in gardens, parks, plantation forests, in the famous planted avenue in Nikko, and in a few ancient forests like those in Yakushima. 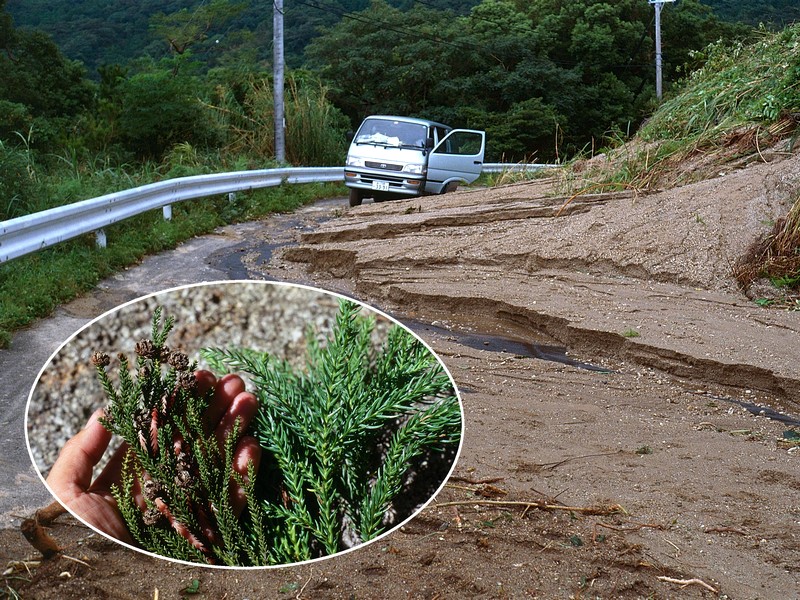 In September 1997, our team's expedition took its direction to the south, but was halted for some time by a typhoon, before reaching Yaku island. Due to very strong winds and pouring rain that hit the island in the days before, some of the roads were completely washed…
Big branches of all sorts of trees were lying everywhere. Collecting samples was convenient but some of the roads were unusable. A main road however was shortly cleared so we could start our ascent to approach Kuromi-dake (1831 m).
Among others, on the way we noticed small branches fallen from very old Sugis, very different from what we usually saw. Holding such a short-leaved sample in comparison with "normal" sugi branches really shows the morphological limits of the species (see the oval inset photo). Also, Cryptomeria shrubs up in north Honshu or in the south near the peak of Kuromi-dake, exhibit a peculiar stunted growth contrasting the form of the elegant large trees that occur in many parts of Japan under favorable conditions.
Perhaps the most famous Sugis are in Yaku island, one of them here pictured with Zsolt Debreczy. - Cryptomeria is the most important plantation tree in Japan, along with Chamaecyparis obtusa and Pinus densiflora, these three species covering about 10 million hectares.
In the many sawmills all parts of the logs are carefully worked up and processed for the most different purposes. - For the further information on Sugi, turn to pages 450 to 457 in the Japanese chapter in Conifers Around the World, and the species description on p. 474 (here also reproduced).