A distinct mistery fir that received its name when published in Acta Botanica Hungarica in 2010. The tree challenged us for many years: it all goes back to our visits to the Arboretum of Kámon (Kámoni Arborétum) in western Hungary, where there was a large tree named Abies chensiensis var. ernestii. As later turned out the name was incorrect. We continued searching for other trees of this plant. 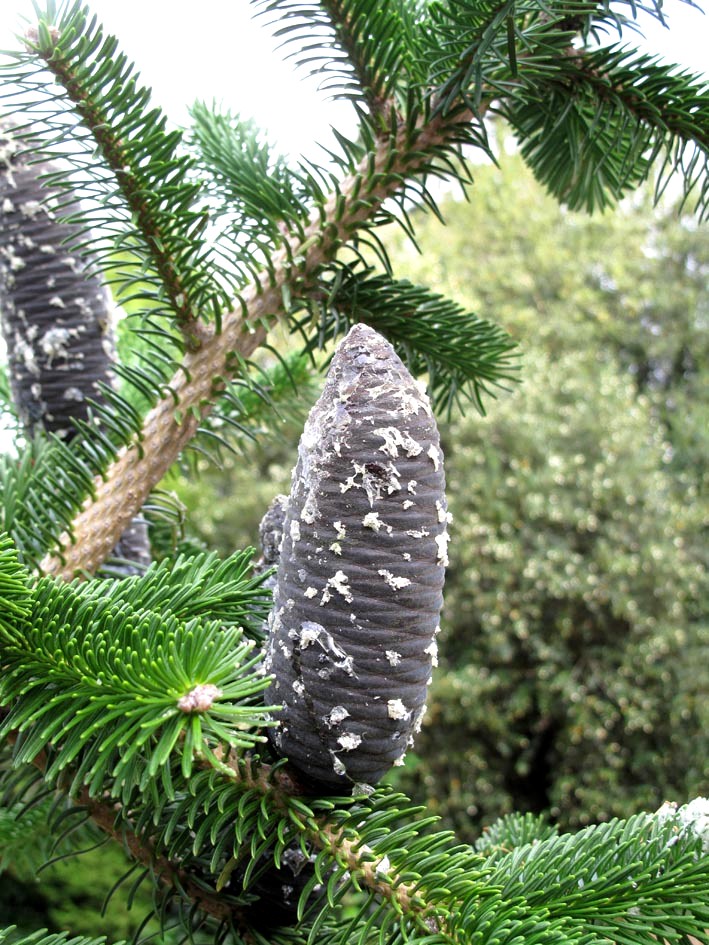 To make it short, on one of our visits to the Sir Harold Hillier Gardens, England (October 1993), we found the same tree labeled as Abies gamblei (as well as on an older label as Abies pindrow var. brevifolia), also a younger tree there named as Abies ×vasconcellosiana, then a third one labeled as the national champion tree of Abies chensiensis, all extremely similar to the Kámon tree. Meanwhile we two times searched, with the help of local experts, for Abies ×vasconcellosiana in Pena Park, Sintra, Portugal, with no success.
There is also a young tree of the same plant cultivated in the Glasnevin Botanic Garden, Dublin, Ireland. Finally, in 2009 a large tree labeled as Abies pindrow var. brevifolia was documented by us in the Dawyck Botanical Gardens and Arboretum, Scotland, where it was found that that tree is also identical with the Kámon Fir. All this is written up in the original publication as well as in Conifers Around the World in detail. We assume there must be more plants (mainly in Europe) in cultivation of the same species and we would appreciate any reports on this distinct plant, with the hope that we can trace its origins, and perhaps, nativity.
It is noted that the plant known as Abies pindrow var. brevifolia should be correctly named Abies gamblei, which occurs widely in the western Himalayas and that Abies pseudochensiensis differs from the latter in several traits. Which would not exclude that this mistery fir will also turn up in those mountains at some point of time.
3 photos: Cone closeups of Abies pseudochensiensis at the Sir Harold Hillier Gardens, England, photographed in 2009, all labeled in different names.
Tags:
Abies