Documenting this species requires to hike Vietnam's tallest mountain peak, Fan Si Pan, sometimes spelled as Fansipan or Fan Xi Pan (3143 m), part of the Hoang Lien Son (range). In December 2003, this was made possible with financial help from I.D.R.I. and the guidance of Dr. Dzuong Duc Huyen, country officer of the Prosea (Plant Resources of Southeast Asia) Project, and deputy head of the Botanical Department of the Institute of Ecology and Biological Resources (Hanoi). 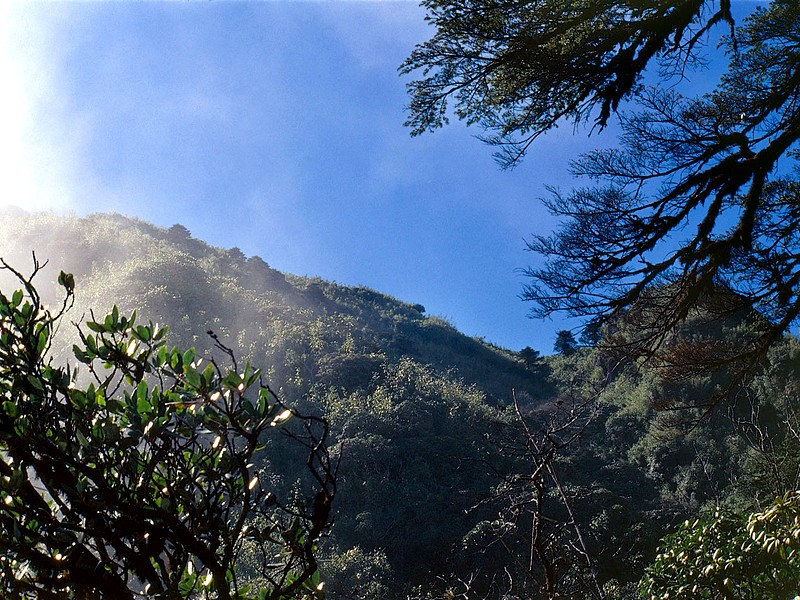 To get to the site, we took a night train to Lao Cai, then a bus to Sapa, a popular tourist town (1500-1600 m) situated at the foot of Fan Si Pan. Next day we cross the Sapa river and start ascending to about 2000 m. The foothill area is rather disturbed, with cultivated fields, rice terraces, and eventually becomes more natural. Difficult hike – very steep and slippery...

At about 2000 m we set up a small camp in the forest amidst primary montane mixed forest with Acer laurinum var. petelotii, and species of Dendropanax, Lithocarpus, Prunus, Quercus, Rhododendron, and other mainly evergreen trees and shrubs.

The second day we hike up to 2700 m to document Abies fansipanensis and Tsuga chinensis var. tchekiangensis (in botanical literature locally recorded as A. delavayi var. nukiangensis, and T. chinensis or T. dumosa, respectively). Though we had a rather miserable weather during the day before (misty, and light rain), the second day was rather dry and in the middle of the day, just when we reached about 2650 m, the coulds begun to disappear, and in a few minutes we had clear sky for about one hour. 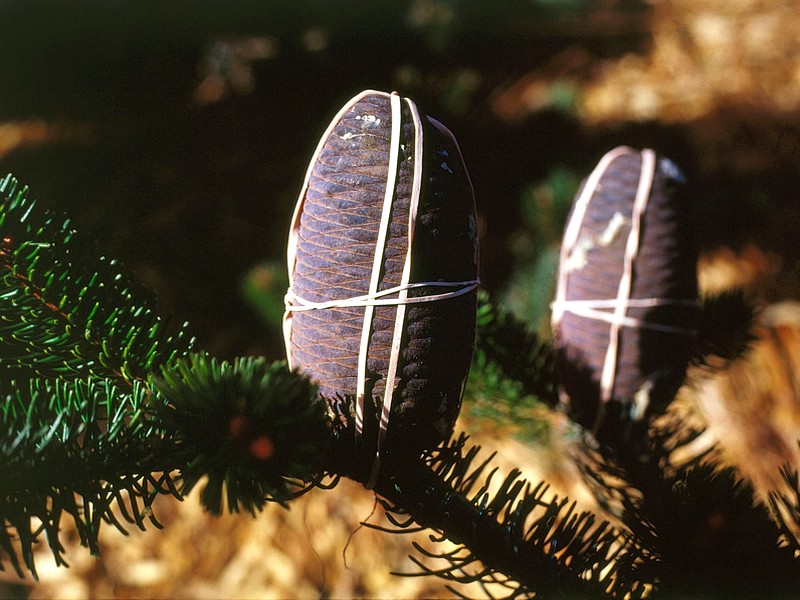 Luckily, we also found a fir tree with cones (in December, this is rare for the true firs), and collected samples with the help of a local climbing person. Here, the constantly wet conditions preserved a few perfecrt cones that are good for photography and preservation. Temporarily, the fir cones are tied with rubber bands to prevent them falling apart; and later (back in Hanoi) treated with alcohol for permanent preservarion or subsequent treatment as dry specimens (held together with hair nets fixed on the cones). We also collect specimens of the surrounding vegetation, including the local hemlock.

On the third day we descend from the mountain and meet again with an officer of the local Forest Protection Bureau and that of the Hoang Lien National Park. We present a brief report about the results of our trip in the mountain. Now this unique fir is featured in Conifers Around the World, page 295.