To document this tree in Sikkim, in late fall 2003 we started our journey together with botanist friend and tour leader dr. Mohan Siwakoti from Kathmandu. From the capital of Nepal we took a flight to Birathnagar, from there took a jeep ride to Kakarvitta (a border town between Nepal and India) and then to Gangtok, capital of Sikkim (state of India). 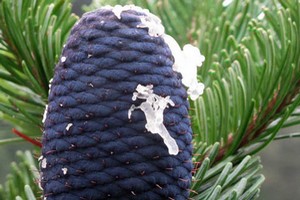 From that base a wonderful guide, who also became a friend, Mr. Bhaila Tashi was leading our small team (Elemér, Géza, Gergő, Anita, István) to various places in Sikkim, including the lower slopes of Khangchendzonga (with the main peak of 8586 m, the third highest mountain in the world).

From the town of Yoksum (1700-1800 m) there is a trail leading to one of the protected areas established in the surroundings of this sacred mountain. The area has huge tracts of almost undisturbed primary forests from about 2500 m up.

Starting in the dark, we had to make a long ascent to the slopes to be in the conifer belt. It took a whole day to reach a small place, Tsokha, at about 3000 m, which is in the midst of Himalayan fir-hemlock forest. Somewhat below this elevation we observed majestic trees of Tsuga dumosa and a few scattered saplings of Abies densa.

The real fir forests showed their best in the morning, with the sun hitting their upper crowns. The largest fir trees were approaching 50 m and trunk diameters exceeding 1 m. Mixed with Tsuga dumosa and several species of Rhododendron, the fir forests continued up to 3700 m, with the last (small and scattered) trees occurring up to 3800 m. 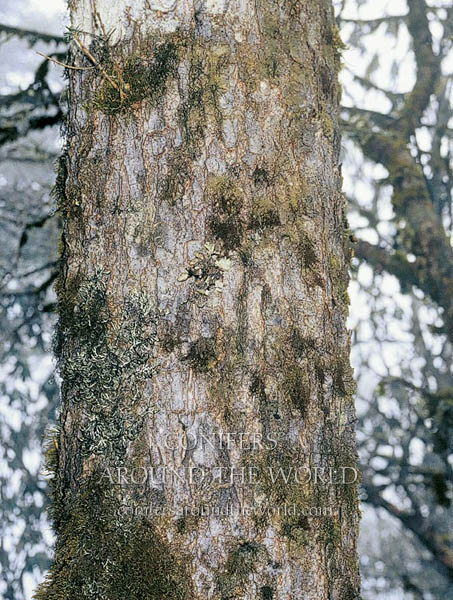 Cones? Almost no cones were produced that year, except a few ones, as we saw a few of them lying on the mossy ground, in one case a little branch having a good cone – sent down probably by squirrels. From these cones and cone fragments we could see the range of cone variation (i.e., bracts almost hidden, or somewhat protruding and either straight or recurved).

Years have passed until, observation and documentation of the cone variation was possible on a different visit in a very different place! It was in Benmore Botanic Garden, part of the world-class institute, the Royal Botanic Garden Edinburgh and its affiliated gardens. There we documented a group of Abies densa trees, growing from seeds (or as saplings) collected by botanists in the 1980's in Bhutan. This extremely well documented living collection contains hundreds of individuals or even small groves of plants from allover the world, primarily from subtropical or wet-temperate climate areas.

The relatively young but mature-enough Abies densa trees documented for our project provided a series of coning samples. From that photo documentation we include here 3 coning photos, alongside some other images that together provide a symbolic portrait of the species.