On our first visit to the homeland of Abies equi-trojani (in the autumn of 1980) we were accompanied by local forestry colleagues to the site where people were busy with seed harvest – collecting cones of the fir. Luckily enough, when we stopped at one place near the mixed stands of fir, beech and black pine, we met workers who had a cart full of freshly gathered cones! 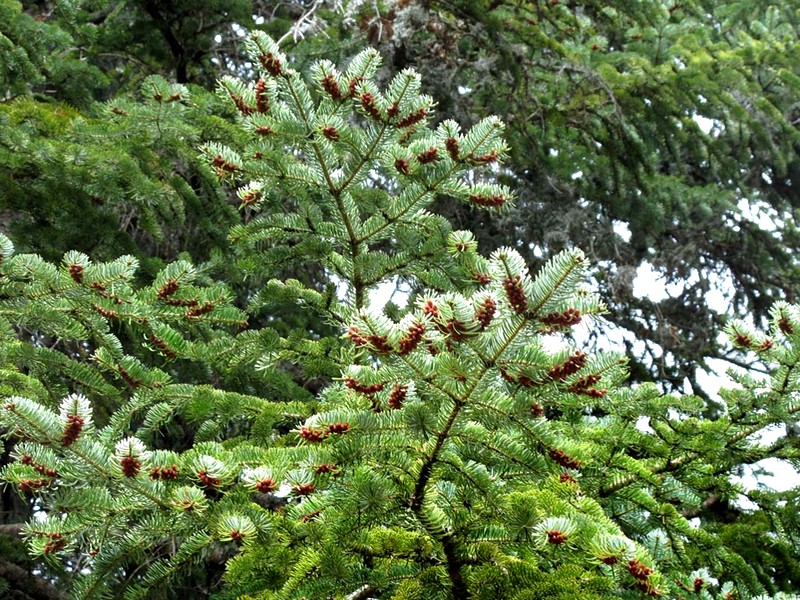 The variation was amazing in size (8 to 17 cm) and color (pale green to almost reddish-brown) of the cones. – Many years have passed and it was a long desire to re-visit the type locality, Kaz Daği/Ida Mountains (Karatas hill, 1774 m) near the city of Edremit, to refresh our observations of the species and take new (digital) photographs of the site and the vegetation. This could take place in late April 2010 as part of a longer journey in Turkey.

With excellent organization by Kathy Musial, to approach Kaz Daği we stayed at first in Yesilyurt, in a nice guest house 'Erguvanly' where our host arranged the entry permit and guidance to the park. To appreciate the uniqueness of the mountain in preserving regional biodiversity, including its flora of 800+ species, Kaz Daği Forest National Park was declared in 1994. Some roads are now running rather close to the best stand of Abies equi-trojani. By the time we reach the forest the clouds come and we get a nice shower… Yet we can take a good series of photos, some of them presented below. (Also, an opening page pair of Conifers Around the World in volume 1 shows the beautiful intact forest of the Trojan Fir).

Abies is dominant between 1300 and 1500 m in a north running valley bordered by steep slopes. Some of the firs are as high as 30 m with trunk diameters of 70-80 cm at b.h. Mingled with the fir is Pinus nigra subsp. pallasiana is, and a few scattered Juniperus communis var. saxatilis can be found in more open rocky sites. Some individuals of Carpinus betulus, Populus tremula, Sorbus aucuparia are also noticed.

– As leaving this place towards the more open slopes, the black pine becomes more dominant forming beautiful old-growth stands with magnificent trees of 30 m or more at some sites; otherwise this pine almost reaches the windswept summit forming low patches or seen as small scattered individuals. (Speaking of pines, as we go down, Pinus brutiaappears at around 800 m and becomes common with a rich variety of oaks – we note Quercus frainetto, macrolepis, pubescens and cf. petraea, but the mountain has other species as well.)