In an article on our findings in Mexico we published this remarkable plant as Pseudotsuga menziesii var. oaxacana Debreczy & Rácz (Phytologia, 1995) but to accommodate this plant in the current understanding of the Douglas fir taxonomy, finally discussed it in Conifers Around the World within the long accepted variety name "var. glauca". 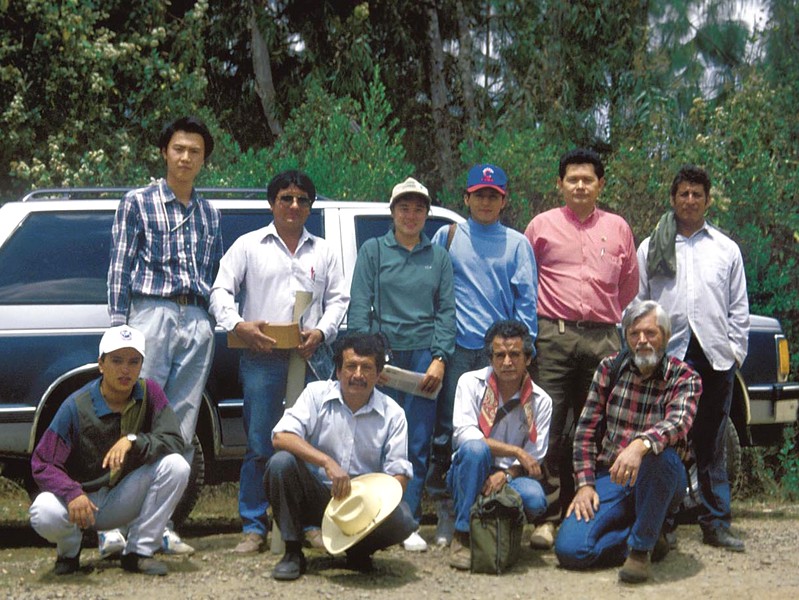 It was an exciting discovery to find this genus in the southern state of Oaxaca, in a mountain range exceeding 3000 m; in the San Felipe Mountains (3200 m) it was first found near and below the limestone cliff called "Peña Prieta", around 2700 m above sea level. With another stand on Cerro Quiexobra near Miahuatlán, also in the state of Oaxaca, Sierra Madre del Sur, these represent the southernmost locations of the genus.
Before the identification of this plant, from a distance of several hundred meters these columnar gray trees looked like a stand of a cypress or some other evergreen tree hiding inaccessibly in the northeastern slopes of the mountain. When finally we approached the place cutting through the jungle-like, no-trail forest dominated by pines and oaks, we were astonished to realize that this is a real Douglas-fir – just perhaps a new variety. Some of the trees were as high as 30 m with trunk diameters around 0.8 m, and densely scaly branches and small cones.
The main associates of this tree were Pinus oaxacana, P. pseudostrobus and P. teocote, alongside with Arbutus xalapensis, Litsea glaucescens, Prunus capuli, and several species of Quercus. Subsequently, the location was visited by professors from the Instituto Tecnologico de Oaxaca and representatives of the Oaxacan and local governments (see photo below). Some years later, when we were again in Oaxaca, in a local "garden center" we discovered small pots with nice saplings of the Douglas-fir – which seemingly reached the local horticulture… Also in 2004, we were shown around in the local visitor center of the protected San Felipe conservation area that now guards the small stands of Pseudotsuga…
Back to 1994, soon after the genus was discovered in Oaxaca, the leading local newpaper Noticias published an article which we reproduce here (photo below) and as translated by Mr. Keith Guthrie, a very kind friend and diligent volunteer on several of our expeditions whom we remember forever.
Discovery of a New Type of Conifer

Noticias, Oaxaca, Mex.
February 27, 1994
Pseudotsuga is the new genus of conifer that has been found for the first time in Oaxaca. Among the objectives of the Technological Institute of Oaxaca (ITO) is the promotion of both scientific research and scientific tourism. With support from the Institute a group of researchers from the Museum of Natural History in Hungary and from the Science Academy of China have located this new genus, which until now was unknown in Oaxaca.

Dr. Zsolt Debreczy, the botanist who heads the group and who is engaged in worldwide research to prepare an "Encyclopedia Botanica", says:
"It is always interesting to find a species very far from its principal area of distribution."
"Mexico today is full of surprises. As far as the flora of Mexico are concerned, it may take several decades before we can say that we know well the make-up of such a conspicuous part of the plant  kingdom as the conifers."
"Up till now the genus Pseudotsuga was known only in the temperate and subtropical zones and in the high mountains of the Asian and American tropics. In Asia the areas in which it was known included the southern part of Yunnan province in China, the nearby Himalayan region, and the island of Taiwan, which is at 24 degrees north latitude. In North America it was known from the State of Puebla, which is at 20 degrees north latitude."
"The location where Pseudotsuga was found in Oaxaca is above the city of Oaxaca in the mountains of Cerro San Felipe. At 17 degrees north latitude, this is by far the southernmost location of this species. It was very exciting to see it here in this mountainous location at an altitude of 2,700 meters above sea level in the summer rainfall zone of the tropics."
"Several weeks before, we had seen these trees at a distance in a rocky area. In shape, they were like narrow columns, and they had a grayish foliage. It was not until February 15th that we had the opportunity to examine this area close-up. Just below a northeast-facing rocky point, we observed a total of about 100 trees, many of them 25 to 30 meters tall and two meters in circumference."
"The trunks are very straight, and the rough, cracked bark ranges in color from dark grayish to orange-brown. The leaves and limbs are very similar to those of the common fir (Abies). However, they are easily distinguished from all other conifers by their small (4-5 cm) pendent cones that have very salient three-toothed bracts."
"This forest definitely needs protection. It is a pearl of the coniferous flora of Oaxaca, and it is important for an understanding of the distribution, migration, and history of the relict temperate flora in the tropics."
"Perhaps it would be worth making an effort to treat this forest as a genbank that could be used to broaden the distribution of this tree as a cultivar, assuming that it can be shown that it is viable as a forest tree. In more northerly areas of North America, the genus Pseudotsuga, or "Douglas-fir", is one of the most valuable forest trees."
"Is there another part of Oaxaca where these trees exist in addition to the one which we observed? To answer this question, further study will be needed. Perhaps our friends in INIFAP (National Forest and Livestock Research Institute) and SARH (Department of Agriculture and Water Resources), or local foresters will be able to answer this question with more precision and to provide data about where this rare species can be found in Oaxaca."
"Is this Oaxacan tree a new species for science? Flous, in his noted article "Review of the Genus Pseudotsuga" (published in the Bulletin of the University of Toulouse in 1936), distinguished several new species in Mexico, but only in Coahuila, Chihuahua, Nuevo León, Durango, Zacatecas, the state of Mexico, and Puebla. However, she mentioned no species from Oaxaca."
This astonishing new and possibly very valuable discovery for Oaxaca was made by researchers from Hungary and China. It makes one question the reason why obstacles have been placed in the way of the study of biology at the university level and the training of Oaxacan professionals in these fields. With government support, it would be possible for Oaxacans to discover and benefit from the extremely rich biodiversity of their state – the richest in this respect in all of Mexico. Then there would not be any need to wait until scientists come from distant countries where they indeed promote these studies, which are basic to the development of any modern society.
It is important to point out that the same week in which the discovery of Pseudotsuga was made on Cerro San Felipe in Oaxaca, news was received that the National Council for Science and Technology (CONACYT) had officially rejected financial support for a research project to survey the forest flora of Benito Juarez National Park, which is located on the slopes of the very same Cerro San Felipe. The research was to be undertaken by a specialist with a degree in botany and ecology from the Technical Institute of Oaxaca. The rejection seems incomprehensible and will be highly damaging to the future of the biological sciences in Oaxaca.
Translated by Keith Guthrie, March 8, 1994