This species is among the most remarkable conifers and one of the true giants of the island of Taiwan, occurring at elevations between 1000 and 2900 m. Our team's documenting the conifers and their habitats in Formosa was coordinated by the Taiwan Forestry Research Institute (T.F.R.I.) and made possible with support from both the I.D.R.I., Inc. and Earthwatch, Center for Field Research.

The tree may attain heights of 65 m and trunk diameters of 6.5 m. One of the giants, once labeled "Alishan Sacred Tree", has its own story in part connected to the building the Ali Shan Forest Railway during the Japanese occupation. The narrow-gauge railway was designed to help extracting timber from the mountain and initially (1912) gained about 2000 m elevation from close to sea level to the place called Erwanping; later it was expanded to reach 2421 m near Zhushan.

During the construction a 53 m high and 6.3 m-diameter tree of Chamaecyparis formosensis was discovered at around 2180 m; it was estimated to be 3000 years old. 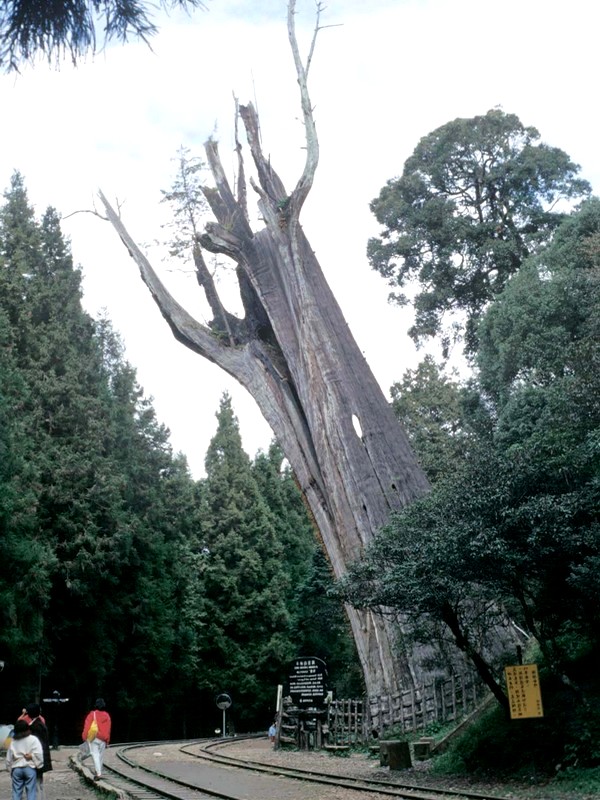 The tree was struck by lightening in 1947 and eventually its trunk became hollowed. Still it was an imposing natural object admired by thousands of visitors, who came to Ali Shan ("Arishan") to enjoy the mountain climate and scenery. It was also admired by us on November 22, 1996 during a brief visit to the mountain as part of the 3-month expedition to Taiwan.

With the assistance of colleagues of T.F.R.I. we made a girth measurement of the fluted trunk (18.9 m) and took some photos. One of these, below, has a group next to the huge trunk, with Kathy Musial on left, Ju Li-Ping in the middle and Zsolt Debreczy on the right.

Reportedly, "on the morning of July 1, 1997, the day Hong Kong was handed over to China, this tree which had stood tall throughout history finally succumbed to the ravages of time, toppling with a loud crash amidst a torrential downpour. A year later, the Forestry Bureau decided for safety considerations to take down what remained of its trunk. The great tree could finally rest in peace.